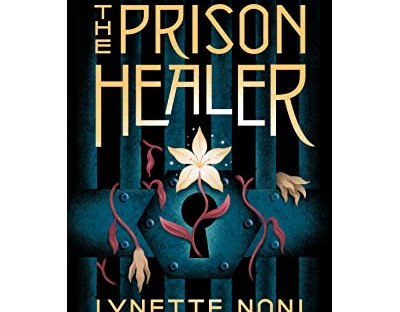 In this book review I will give star ratings to four categories and I will write a little about each one. I will try to keep it as spoiler free as possible. I hope you enjoy my book review.

This plot had great potential. There were so many elements that I love in books in The Prison Healer: interesting setting, elemental magic, themes of friendship and a competition. I really enjoy competitions in books, something about it always captures my attention. The setting in this book, definitely interesting, is a prison this gave the book a sense of danger always being right there waiting for a chance to take over. I think the magic was a great addition because it gave the story another level, a sense of us and them – being those with magic outside the prison, as only members of Royalty have magic, and those without magic inside the prison. This gave the world a conflict that goes above the plot of this one novel, and which I hope will continue in the next book in the series.

The competition element, was needed. Well, something a little exciting was needed. I was just starting to feel a little bored of the plot when the competition was introduced. It was a shame because before this there was one of the main elements of the plot which should have quickened the pace and caught my attention, but it didn’t. Although I enjoyed the competition part of this book, it had some very unique elements and was quite interesting, I felt that this part and the rest of the book didn’t fit together – like they were parts from two separate books pushed together. Because of this I also think the competition elements were fit into too small a section of the book, I would have liked it to be more developed.

The ending had a huge twist. One that felt a little too convenient for the story but also persuaded me that I should read the second book… I might not have without the twist.

There are four characters that make up the main cast of this book. Kiva is the protagonist and I really liked her character. She is fiercely loyal to her friends although I’m not sure friend is the right word…anyway, her development throughout the book is excellent in my opinion, I enjoyed seeing how she changes. The main male character, is very intriguing to me. I want to know more about him but I also don’t, does that make sense? Sometimes there are characters that I like being surrounded in mystery, it keeps them interesting. But my favourite character is Tipp, he works with Kiva and I would honestly do anything for him, he’s so sweet and innocent I just want to hug him but obviously I can’t because he’s fictional.

The Prison Healer Writing and Dialogue:

In terms of the writing style, I got along with it well. It was smooth and easy to follow the plot. I actually finished the book in under two hours so it’s definitely good writing for me. One thing I did like was the chapter sizes. They were the right length for me, not too long but not too short either. I liked feeling that I was getting more of the story in each chapter.

I gave this book three stars because it was an okay book. I did enjoy it and I want to see where the story goes in the series but I didn’t love it, it just felt too rushed for me. I would have rather had a longer book and a fully developed story.

Seventeen-year-old Kiva Meridan has spent the last ten years fighting for survival in the notorious death prison, Zalindov, working as the prison healer.

When the Rebel Queen is captured, Kiva is charged with keeping the terminally ill woman alive long enough for her to undergo the Trial by Ordeal: a series of elemental challenges against the torments of air, fire, water, and earth, assigned to only the most dangerous of criminals.

Then a coded message from Kiva’s family arrives, containing a single order: “Don’t let her die. We are coming.” Aware that the Trials will kill the sickly queen, Kiva risks her own life to volunteer in her place. If she succeeds, both she and the queen will be granted their freedom.

But no one has ever survived.

With an incurable plague sweeping Zalindov, a mysterious new inmate fighting for Kiva’s heart, and a prison rebellion brewing, Kiva can’t escape the terrible feeling that her trials have only just begun.

That’s it for this book review, I hope you enjoyed it!

View all posts by theblindscribe

2 thoughts on “Book Review: The Prison Healer by Lynette Noni”