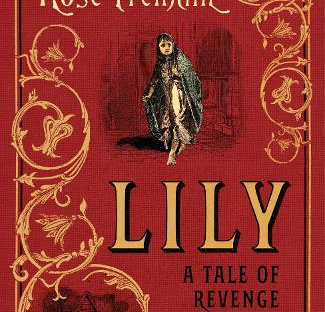 Happy Monday bookish people! Today I am bringing you a book review for Lily by Rose Tremain. This is a mystery/historical fiction book with a beautiful cover that sounded so good to me, I read the blurb and I was desperate to read it and I have to say I was disappointed.

In this book review I will give star ratings to four categories and I will write a little about each of them. Now, usually I say here I will try not to include spoilers but that’s not easy for this book so I will be giving spoilers to this book in this book review. If you don’t want to be spoiled I would recommend reading the book before you read this review.

The blurb of this book sold it to me as a story of a young woman who gets into a romance with a policeman, after having murdered someone in her troubled past. I thought it would be an exciting cat and mouse style chase while she tries to not be discovered. Instead what I got was 150 pages before I even found out what the murder was and where it happened and soon after the reader learns that although the policeman believes it was murder, he wasn’t even investigating it. It took all the (already very limited) suspense out of the novel. For me there was too much description in this book, it details almost every aspect of Lily’s life, all throughout her childhood at the children’s orphanage and the treatment she suffered there and then her employment at the wig emporium. As a reader I didn’t need most of this, some of the chapters about Bridget her friend and her fate, and the abuse she suffered were relevant especially because it shows the reader why the murder happened. But the rest was too much unnecessary information. There was also a plot point about her trying to find out who her mother was and why she was left in the park in the snow, this is never completed. It seems to just get forgotten about in the book.

Lily is the main character, and I didn’t feel anything for her. I understood that you were meant to have an emotional connection to her because of her backstory but I didn’t get that from the story. I wanted to see more of the policeman, Sam Trench, he barely featured and definitely not in the ways the synopsis suggested he would be.

This book did manage to get the feel of a Victorian novel, dark and sensory and this was put across in the writing, which was good but the dialogue wasn’t as good as I expected.

I gave this book two stars because, as I am sure my review shows, this book wasn’t what I thought it would be and I was very disappointed.

Nobody knows yet that she is a murderer…

Abandoned at the gates of a London park one winter’s night in 1850, baby Lily Mortimer is saved by a young police constable and taken to the London Foundling Hospital. Lily is fostered by an affectionate farming family in rural Suffolk, enjoying a brief childhood idyll before she is returned to the Hospital, where she is punished for her rebellious spirit. Released into the harsh world of Victorian London, Lily becomes a favoured employee at Belle Prettywood’s Wig Emporium, but all the while she is hiding a dreadful secret…

Across the years, policeman Sam Trench keeps watch over the young woman he once saved. When Sam meets Lily again, there is an instant attraction between them and Lily is convinced that Sam holds the key to her happiness – but might he also be the one to uncover her crime and so condemn her to death?

Happy Friday bookish people! I am excited to be bringing you another book tag today, the spring has sprung book tag!

Flowers – Look on your bookshelf, what is the most beautiful book inside and out: A River Enchanted by Rebecca Ross the Illumicrate edition

This cover is just stunning, I haven’t read it yet but I’m sure that the story is just as beautiful

Grass – what is a book that you find others like way more than you did: The Raven Boys by Maggie Stiefvater

Rain – what is a great book that lifts your spirits when you’re down: Caraval by Stephanie Garber

Dew – what’s a book that made you feel alive: Truly Devious by Maureen Johnson

Storms – what’s a book that you found unpredictable: Moonflower Murders by Anthony Horowitz

Rainbow – what was a book you struggled with but you were glad you finished it: Since You’ve Been Gone by Morgan Matson

Warm weather – a book you loved and you wanted more of: any books by Kerri Maniscalco!

The stalking Jack the Ripper books series and the Kingdom of the Wicked series, I love all of them!

Green – a book you haven’t read yet but really want to: Our Lady of Mysterious Ailments

Pink – a book in which you felt a strong connection to the characters: Sorcery of Thorns by Margaret Rogerson

Purple – what’s a book that when you read it made you feel safe: I don’t have an answer for this one unfortunately.

Orange – what book do you feel is intelligently written: any Agatha Christie book

Yellow – what book puts a smile on your face: the Pages and Co series by Anna James

That’s the end of this book tag, I hope you all enjoyed it! How would you have answered these questions?

Happy Sunday bookish people! I hope you’re all having a good day. Today I am bringing you my April wrap up and I’m so glad to say that my reading has been a little bit better this month, not amazing to the extent that I was at this time last year but so much better than March and February. So I’m going to get straight into which books I did and didn’t read in April!

So that was what I did and didn’t read in April. I ended up reading 5 books and started two others, one of which I will finish in a few days so I am really happy with that.

Happy Friday bookish people! Today I am bringing you my April TBR which includes what books I will be reading for the prompts of the Easter readathon I am co-hosting this month.

Once again, my TBR game gave me a lot of rolls so there are quite a few books to read this month, I am hoping that my reading will improve this month.

That’s it for my April TBR!

Happy Friday bookish people! I can’t believe it is March already! I thought it might be fun to share with you all some of the books I own that I think have beautiful covers.

The Once and Future Witches by Alix E Harrow

Where Dreams Descend and When Night Breaks by Janella Angeles

Chain of Gold by Cassandra Clare

The Ten Thousand Doors of January by Alix E Harrow

The Court of Miracles by Kester Grant

The Hatmakers and The Mapmakers by Tamzin Merchant

That’s it for this post, I hope you enjoyed it. What are some of your most beautiful books?